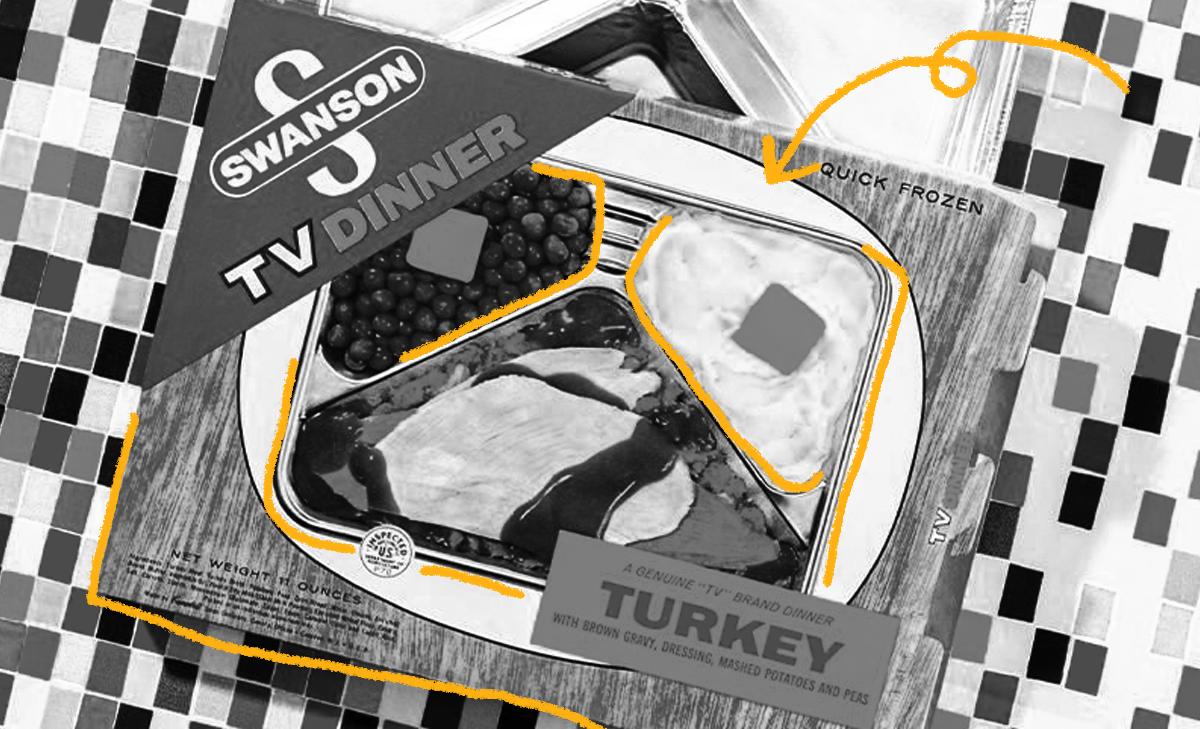 The History of TV Dinners

The first ever TV dinners were created by Maxson Food Systems, Inc. They were called Strato-Plates and sold to airline staff and passengers beginning in 1945. However, the company’s founder died soon after and the company ran into financial issues, so Strato-Plates were never offered in supermarkets. In the late 1940s, Jack Fisher’s FridgiDinners were sold to bars and taverns. These didn’t really take off, either. Then in 1949, Albert and Meyer Bernstein created Frozen Dinners, Inc. Their company sold frozen dinners packaged on aluminum trays with three distinct compartments. They began selling their products in the Pittsburgh area and had expanded distribution to over 2,500,000 frozen dinners by 1954.

However, TV dinners didn’t truly catch on until Swanson entered the market. The most commonly accepted account holds that Gerry Thomas, a Swanson salesman, noticed that there were 260 tons of frozen turkey left in refrigerated railroad cars after Thanksgiving in 1953. Thomas suggested they add the turkey to aluminum trays like the ones Pan Am was testing out alongside other holiday staples like cornbread stuffing and sweet potato. Thomas was later credited as the inventor of the TV dinner and honored by the American Frozen Food Institute’s “Frozen Food Hall of Fame.” However, in recent years his role has come into question. Betty Cronin, Swanson’s bacteriologist at the time and the person responsible for working out how to ensure that all the different foods cooked thoroughly in the same amount of time, asserts that the Swanson brothers themselves came up with the concept. The Swanson brothers also back up this version of the story and refute Thomas’ claim.

Regardless of who came up with the concept, Swanson was undeniably the first company to coin the term “TV dinner” and successfully market the product to consumers. Swanson’s TV dinners launched in 1954, and by the end of that year, Swanson had sold ten million trays. The first TV dinner included: turkey, gravy, cornbread stuffing, sweet potatoes, and buttered peas. This was all packaged up in a foil-covered, segmented aluminum tray. The cardboard box that the TV dinner came in was even designed to look like a TV, complete with a facsimile of dials and a volume control knob. It sold for 98 cents.

As women began entering the workforce in greater numbers, there was a growing need for prepared meals. Along with Swanson, other companies like Banquet Foods and Morton Frozen Foods began offering their own frozen dinners. And indeed, middle-class households across America embraced the product. While some men wrote to Swanson complaining that their wives were no longer cooking them meals from scratch, for many families, TV dinners were the perfect complement to their changing lifestyles. In fact, TV dinners were often eaten while enjoying another new trend: television. Families would gather around to watch TV programs and eat their TV dinners on trays. By 1955, over 64 percent of American households had a TV – up from just 9 percent in 1950. Swanson took advantage of this and ran TV ads showing elegant, modern women serving TV dinners to their families. Historians today point out that in addition to the convenience factor, the on-trend futuristic packaging of TV dinners helped them capture the public’s fascination and achieve unprecedented success.

The TV dinner was continually improved upon over the next few decades. In 1960, a dessert compartment was added to the TV dinner. The first dessert offered was cobbler, but other options like brownies were added soon after. In 1962, Swanson removed the term “TV Dinner” from their packaging in the hopes of encouraging consumers to use their products for various meals during the day; they even debuted Swanson Breakfasts in 1969. TV dinner portions became significantly larger when, in 1973, Swanson debuted their Hungry Man meals and Banquet introduced their Man Pleaser dinners. In the 1980s, advertising moved away from images of harried housewives to show more tranquil, relaxed diners enjoying their meals without any stress. And in 1987, a tray from one of Swanson’s original TV dinners was added to the National Museum of American history, forever commemorating the TV dinner’s influence on American culture.

In 2008, frozen meal sales began to fall after nearly 60 years of continued growth. However, frozen meals have seen a resurgence in 2020. With many restaurants closed due to the coronavirus outbreak, Americans have been purchasing TV dinners once again. In fact, according to the American Frozen Food Institute, Americans spent almost 50 percent more on TV dinners in April 2020 as compared to April 2019. While food culture has shifted in recent years to focus more on fresh ingredients, the TV dinner has once again proven that it still has a place on many American tables.